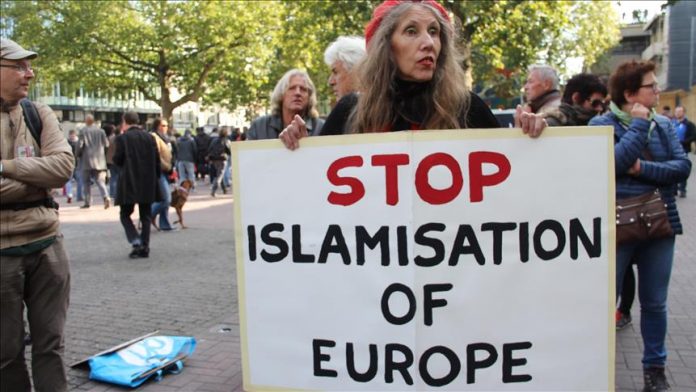 Muslims around the world have been in distress for some time now. The growing hostility towards Muslims has marginalized them from all walks of life. Despite being the second-most followed religion of the world, Islam is being portrayed as a religion of violence and ferocity. This is indeed a moment of concern for the 1.8 billion Muslims around the globe.

The term Islamophobia was first coined by the Runnymede Institute in 1997; since then, this phenomenon has been palpable across all continents – especially in Europe. The fear of Islam has been instilled in the hearts of non-Muslims through various channels. With every day passing by, it is becoming arduous for Muslims to prove their loyalty to their non-Muslim colleagues and leaders. What has been the root cause of this growing pathetic trend?

First and foremost, the publications of a few renowned scholars proved to be a building block of the growing antagonism towards Muslims. Samuel P. Huntington – an author and political scientist – published his thesis titled ‘The Clash of Civilizations’ in 1992. The thesis explicitly mentioned that the war between states would be replaced by the war between civilizations. Moreover, he added that western civilization would be challenged by the Muslim civilization. Since then, the westerners have considered Muslims as their rivals. This theory was further strengthened when a huge number of Muslims started moving to western countries. The massive influx of Muslims was a threat for the westerners, as they believed that Muslims would eat up their jobs and culture. Their fear was further escalated when the PEW Research Center published a report claiming that more than 20 million Muslims reside in Europe. Furthermore, the right-wing parties in the west used the anti-Muslim narrative to gather public support during elections. For instance, the Austrian Freedom Party’s campaign was based on the slogan “Vienna First! Instead of Turkey in the EU”. Such campaigns manifest that the anti-Muslim narrative is spreading, and it is alarming for all.

Secondly, the notorious role of media has made people insecure when they are around the Muslim community. In the era of digital, social, and print media, maligning a certain group is a plain sailing task. Hence, the media proved to be a key weapon for those who wanted to slander Islam on all platforms. The Charlie Hebdo case is an example that merits mention here. In the name of freedom of speech, the nefarious editors of Charlie Hebdo published the caricatures of the Holy Prophet Muhammad (PBUH) – the prophet of Islam. Consequently, there were clashes between Muslims and non-Muslims. The warmongers were successful at spreading rigidity in the public sphere, and yet again, people started fearing Muslims when they spoke against the Hebdo publications. Thus, the media has played a role in demonizing Islam and portraying it as a religion of violence.

Thirdly, the emergence and activities of so-called Jihadist groups were a serious blow to the image of Islam and Muslims. In 2001, for instance, the 9/11 incident took place by Al-Qaeda. This attack was condemned all around the world, and since then, leaders have vowed to fight against the Islamist militants. The fact of the matter is that hardliners belonging to Al Qaeda and different militant groups have no understanding of Islamic tenets, but still, they claim to be the warriors of Islam. In a recent video that surfaced on social media, a member of ISIS was asked a few basic questions about Islamic teachings, and to the public’s consternation, he was unaware of the basic principles of the Holy Quran. Owing to this phenomenon, people fear Islam, and any person with a beard is mistaken to be a terrorist. Even today, fanatic groups – such as Boko Haram in Nigeria – continue to abduct young girls and kill innocent people. Hence, all these episodes of violence and barbarity create a negative portrayal of Islam.

Fourthly, the fundamentalist Islamic scholars have left no stone unturned to defame Islam. These scholars have memorized the Holy Quran; however, they have failed to interpret the meaning of the Quranic verses. For them, killing non-Muslims is tantamount to waging Jihad; and to defend their stance they quote the verses of the Holy Quran. Unfortunately, the literacy rate in the Muslim world is abysmally low, which compliments the misinformation and hate speech spread by hardliners. Muslims fail to verify the teachings of their scholars and they blindly follow them; consequently, they develop an extremist approach. Taking the example of Pakistan – where more than 16,000 madrasahs are unregistered – warmongers get a chance to dispense hate speech. The outcome of this unchecked and unmonitored growth in madrasahs and scholars is that Muslims are influenced by wrong ideologies, and subsequently, they take mortifying steps that attract criticism throughout the world.

Lastly, the silence of the Muslim world, in this case, has motivated the anti-Islam campaigners to preach a spiteful description of Islam and Muslims. The Organization of Islamic Cooperation (OIC) – the second-largest global body – has decided to remain silent despite the ongoing brutalities against Muslims around the world. Moreover, numerous Muslim states are not united amongst themselves; in fact, they are fighting a cold war in the Middle East. Dilip Hiro, the author of ‘Cold War in the Islamic World’, writes that Islam will continue to face multipronged challenges unless the Muslim countries unite over one agenda. Instead of preserving Muslims’ rights, Muslim countries continue to forge alliances with Israel – which is responsible for the persecution of Muslims in Palestine. The recent ‘Abraham Accords’ is a relevant case in point here, and it is enough to suggest that the Muslim states have prioritized their commercial interests over religious interests.

Moving on, the ramifications of Islamophobia are not just felt but seen. The even-handed citizenry can be seen to have certain insecurities when they are around Muslims. On a state level, Muslims are discriminated by imposing a ban on Veil (Purdah) as seen in France. Besides, people refuse to sit with Muslims, as was the case in 2015 at the Midway airport when a family refused to sit with Muslims in a passenger aircraft. On a broader level, the consequences of Islamophobia can be seen in the form of orchestrated pogroms and targeted killings. The Christchurch shooting in 2019 speaks volumes about the hatred for Muslims. Even in places like India, where there is a huge Muslim community, Muslims suffer at the hands of RSS chauvinists. Another relevant example is of Rohingya Muslims, who are forced to flee their homeland just because they belong to a certain community.

In the light of the above, the Muslim world must address this issue. The Muslim states need to set aside their differences and work tenaciously to eliminate Islamophobia. To make this happen they need to reinforce the United Nations’ resolution 16/18, which combats violence against religious communities. Doing so will require time and effort; however, the outcome will be cherished by the Muslim world for a long time.

History of Afghan Crisis: the fall of Taliban regime and “War...

Is Covid-19 going to cost globalisation?