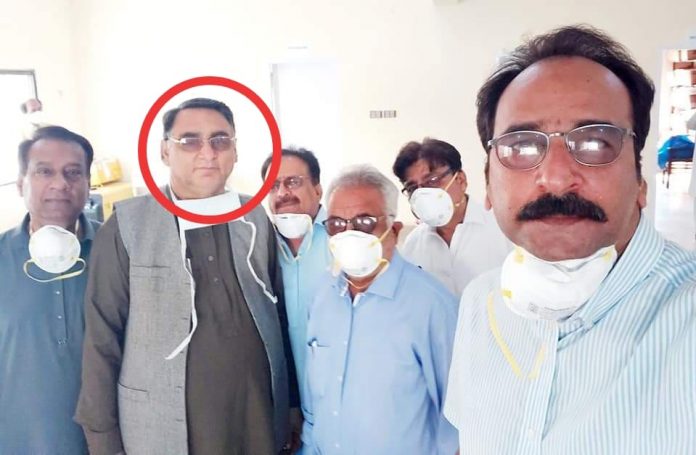 Dr. Shafqat Shaikh, an additional civil surgeon at teaching hospital Khairpur Medical College (KMC) Khairpur, lost his battle against coronavirus today around 1 am, making its first causality among the doctors who were deputed at Quarantine Zone Sukkur. Before, a young doctor namely Zain ul abdeen Bhayo from the same quarantine zone was tested positive for COVID-19, but he recovered, mainly, owing to his young age and sound health. However, Dr. Shafqat was diabetic, hypertensive and was in his 50s, when the virus attacked him.  He developed some symptoms and was admitted in the isolation ward at the hospital of Gambat Institute of Medical Sciences  (GIMS).

Dr. Shafqat Shaikh was born at Mohllah Mir Ali Bazar, Khairpur Mir’s, in the family of the famous advocate Noor Ahmed Shaikh. His father suffered from stroke and is currently lying motionless in his bed. He did his MBBS from Dow Medical College and spent his entire life in treating the citizens of his native city. Currently, he was working as Additional Civil Surgeon at teaching hospital Khairpur Medical College (KMC). He has left his two sons and one daughter behind.

When the first case of COVID-19 emerged in the country, the Sindh government established Quarantine Centre at Sukkur to put the Zahireen of Iran in isolation because it was believed that they were caring the virus. Dr. Shafqat Shaikh along with other senior doctors was deputed at the quarantine Centre where he had been performing his duty for 14 days. Many doctors were above 50 and suffering from diseases like diabetic and hypertension and thus, they were not medically fit to be appointed in the Corona zone. They also protested and claimed that they were being deputed because of their Shiite sect. However, the administration did not consider their appeal.

Since he was an additional civil surgeon and had more responsibilities, it is still unknown from where he, actually, got the virus. He had been in the isolation ward for four days and lost his battle against the Covid-19. It has been reported that he oxygen saturation (OS) was static at 82% and was not improving. Why the OS level was not improving. It was because the ventilator was not working properly or he did not receive adequate care from the staff of the hospital? These questions remain unanswered.

The information regarding the victim is collected from Dr. Aijaz Samo who was his close friend and worked along with him at Quarantine Zone Sukkur.

History of Afghan Crisis: the fall of Taliban regime and “War...

Is Covid-19 going to cost globalisation?